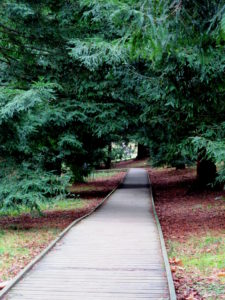 Stick to the path, Red was told.? Don’t step into the woods.? No good will come of it.? There are things living in the woods that would mess with your mind as soon as say ‘Good morning’.? All your life, you are told what to do and what not to do, and given creepy reasons for it.

Well, on this day, Red had decided to buck the trend.? She was going to step off the path – just once – and prove the grown-ups wrong.? It was her day for taking the shopping to her grandmother, who lived about ten minutes away through the trees.? Every time – EVERY time – she walked through that door it was the same thing: stick to the path, don’t step into the woods, no good will come of it, there are things living in the woods that would mess with your mind as soon as say ‘Good morning’.

She walked far enough away from the house to be out of sight, but close enough for someone to hear her scream if she ran into trouble – she wasn’t stupid – and she stopped.? There were one or two birds singing in the trees and a soft breeze rustled the leaves that still hadn’t fallen.? She could barely hear the clanking of pots as her mother washed the dishes from breakfast.? No other sounds.? She looked along the path in both directions and could neither see nor hear any signs of movement.

Now, she thought.? My moment has arrived.? She shifted a little towards the edge of the path and waited.? Nothing.? She moved even closer to the edge and waited again.? Now her foot was grazing the path border, a line of stones slightly raised to show you just where to stop before it was too late.? Red breathed in deeply, lifted her foot and moved it over the path border, without actually putting it down on the other side.? It hovered, as though transfixed, for several seconds and then she took the final step – literally – and put it down on the soft, mossy earth.? Now she stood straddled between right and wrong.? Was this the end of her?? Would something come tearing out of the trees, teeth glinting in the sunlight, and rip her limb from limb???? Was she to be the proof that dark things did live in the depths of the woods?? She waited for what seemed like hours.? Apparently not.

Red put her other foot onto the woodland floor.? Still no apocalyptic monster.? She realised she hadn’t actually breathed out in a while, so she did.? Given that she was now well and truly in unknown territory, Red decided to walk amongst the trees.? She kept the path in sight to her left and took the time to feel the forest floor under her feet.? She almost wanted to take off her shoes and socks to feel it on her skin, but she had a fear of stepping in ‘something’ that a small animal might have left, so didn’t bother.? As she looked around her, she spotted something brightly coloured a little further away from the path.? It was purple and seemed to shimmer in the limited sunlight that reached it through the canopy.? She checked her position.? She was still close to the path, although further away than she remembered.? Judging the distance to the purple thing, she decided she could still reach it and stay within range of the path.? She put her back to the lifeline through the woods and counted her steps as she moved towards the object of her desire.? She made it in fourteen steps.? The purple thing was a flower.? It was still covered in dew, which is what made it glisten, and it was one single bloom in a sea of brown leaves.? She knelt beside it to have a closer look and it seemed to stare back into her very soul.? She felt herself floating and was suddenly looking down on the flower from an apparently great height.? She blinked and, when she reopened her eyes, she was back on the ground.? She glanced back at the the path.? It had gone.? She thought she could hear her mother calling, reminding her of the dangers of stepping off the path. 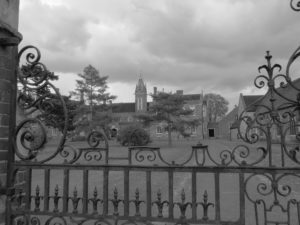 It was hard to look at that place after so long.? The trees had grown and the grass needed cutting but, apart from that, nothing had changed.? There were more grave markers in the churchyard next door – obviously – but the overall feel was unmistakeable.? I looked at the windows for signs of familiar faces, but there were none.? No laughter spilling from rooms around the building, no good food smells drifting from the kitchen, no sounds of wheels on the gravel driveway.? Even the gigantic iron gate seemed sad and despondent.

As I peered through the bars, as small shiver went through me, a feeling that there was something nearby that wasn’t there before.? Something that knew me well yet was so distant in time that it might walk straight past me.? I turned.? There was nothing.? I would have liked to have run, in my bare feet, across the grass to the imposing front door, played hide and seek in the Long Gallery with my friends, sneaked into the kitchen for a secret taste of tonight’s meal.

A hand rested on my shoulder.? A soundless voice whispered close to my ear:

My hand was taken and I felt myself rising into the air.? Now I was looking at the house at an angle, now from above.? It drifted out of view behind the clouds and was gone.? It was always the same.? No-one I know and nothing to see.? In another hundred years it would be the same.

This is something I have told people over the years but I need to write it down, as I still don’t believe it.? It never loses relevance.

I was lucky enough to spend the last fourteen years of my working life in a small, private girls’ school. The first two years were as a Year 2 class teacher, during which I was responsible for teaching to the end of Key Stage 2 SATs.? The whole testing, marking and reporting back to parents merry-go-round was an annual ritual that no-one enjoyed.? These girls were six and seven years old but it was the way it was done.

The first year was difficult, as I had a huge range of abilities; there were, effectively, eighteen children and five ability groups.? The girls at the top were very bight and easy to teach whilst the ones at the other end were a real challenge.

The second year was equally taxing.? By the time we were a few weeks away from the tests, it became glaringly obvious just how stressed these children were.? I discussed it with my head teacher – a down-to-earth woman with very strong opinions – and she agreed to come and talk to the class, to try and calm them down a bit.? She did a sterling job and was just about to leave when she casually asked them to put up their hand if they had a tutor.? Two-thirds of? the class raised their hands.? We looked at each other and said nothing.? At the next break, I went to her office and she was genuinely shocked.? She told me she had no idea of the prevailing situation and was going to stop doing the Key Stage 1 SATs immediately.? We would still use them as a baseline assessment for moving into Key Stage 2 but it would be unofficial and there would be no detailed reporting back to parents.? Any comments would just form part of the end of year report.? The school governors at the time agreed.

It was a bold step.? As we were an Independent School, it was possible but the ludicrous situation of force-feeding children linguistic and mathematical information that they will probably never need – and certainly don’t need to know at seven or eleven years old – is barbaric.? I am actually ashamed to have helped perpetuate? this system for so long but it was my job and that was the price.

I once read that a famous author’s work was analysed and didn’t even make a Level 5.? What need does an eleven-year-old have to do so?