Not an original name, Spot, but it suited him perfectly.  The little cross-breed was completely white except for one, teacup-sized black spot on his left flank.  It made him look as though he had a portal to another galaxy in his side, or an eye without the iris.  His small, slightly pointed face seemed to always have a smile on it and he had a twinkle in his eye.  Throw a ball and you could be sure that Spot would rush off and return it to you, whether you wanted him to or not.  Bring out a brush and he would immediately be on the floor, waving his paws in the air and anticipating the bliss to come.  If there were children about, he was the gentlest soul you could imagine, allowing them to do things that other dogs would repay with a nip or a full-blown bite.

And yet here he was, sitting by the bench in the park, waiting to be taken home.  He waited there every night, as this was when he was first left there.  He waited with his tummy growling and a wild thirst in his mouth, because he knew that there would be food and water when he arrived home.  Big Master had  taken him from the puppy group when he had just left his mother.  It was cold outside and there were soft, white flakes on the outside ground.  He had been carried into the warm inside and handed to the Small People, who cuddled and fussed him until he was tired and fell asleep in his new bed.  Life was sweet for a while.  Big Mistress made sure that the Small People took him for walks to give him exercise and to the park to make sure he met other dogs. He was well fed and had a comfortable place to sleep.  The warm weather came and went and Spot was the happiest dog in the world.

After a while, the Small People weren’t so small and they had other things to do.  They couldn’t take him for walks.  Big Mistress was always busy in the house and couldn’t take him out either.  Big Master had never shown any interest in him from the day he brought him into the house.

Then one evening, Big Master made happy noises to Spot.  He fussed him and gave him treats, putting his lead on him and walking him out of the door.  At first, Spot thought he was going for a walk with Big Master for the first time ever, but they went to the car and Spot was lifted onto the back seat.  There was a  journey and the car stopped.  Spot was lifted out of the car, his lead and collar removed and he was told to ‘Sit’ by the bench.  He was an obedient dog and did so without complaint.  Big Master climbed back into the car and drove away.

So, here he sits, waiting to be collected.  His tummy had long since stopped growling and he felt no thirst.  Even though there was mist all around and the leaves were red, gold and brown, he wasn’t cold.  He wondered when the daylight would come back – perhaps that would bring someone.

Ava slid into her usual place on the bench.  She and the bench were good friends.  It was her favourite place in the park and she objected if she couldn’t be alone.  She liked the peace of that particular corner of nature and it was the perfect place to think.  Even though it was on a path, few people went along this one and it was rare that she was disturbed.  Somehow, when the sun went down and the night-time animals were about, that was the best time of all.

She couldn’t remember why she preferred this time of day; it wasn’t something she dwelt on.  It was enough for her that she did.  She sat and watched a small rabbit, separated from his warren-mates, move tentatively across the open space in front of her.  She had difficulty remembering her own family; it was a long time since she had been in contact.  She wondered how they all were.

She watched the mist swirl round her and mused that it was a good thing she had her coat on.  It always seemed to be like this when she came to the bench.

She looked down at the small suitcase beside her and tried to remember what was in it.  Clothes, of course, and some toiletries, but what else?  Funny – she’d only packed it earlier that day.  She couldn’t remember what was in it, no matter how she tried.  Was her memory fading?  Ridiculous!  She was still young.  Memory loss didn’t happen to people of her age.

A man walking his dog came into view along the path.  Ava hoped he wouldn’t come past her but she was out of luck.  As he came closer, the dog sniffed around the bench and her feet but, thankfully, didn’t try to jump up at her.  The man walked quickly passed and didn’t even respond to her “Good evening”.   People are so rude.

A sudden memory leapt into her head.  They did, sometimes,  This one was of a similar time at the bench but it was very faint.  She saw herself, as though through another person’s eyes, sitting there.  Just like now.  With her suitcase full of things she couldn’t remember.  She heard a noise behind her and felt a pain in the side of her head, then nothing.  Strange, how your memory can play tricks on you.

She wondered if Callum would ever arrive; she was bored now.

Light was beginning to appear in the sky.  As the shadows crept across the grass, the bench was empty once again.  Until the night returned. 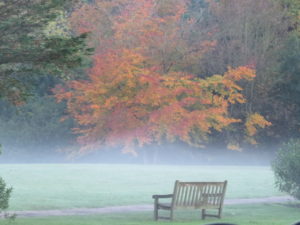 Without a doubt, this was the most beautiful place in the park.  The trees were different heights, different colours and had different characters.  Yes, the trees had characters.  Some were upright and sturdy, some were bowed and conciliatory looking.  Others spread as far as they could, attempting to take over any available space.  The grass was usually a deep shade of green, except when it was covered in snow and, even then, it glistened like stars, so you didn’t mind.  The single path that wound its way through the trees was a pale grey and contrasted well with nature’s colours.

Beside the path stood a lone bench.  Made of wood, in the typically functional style of the urban park, it offered the ambler a place to rest before carrying on to further delights.  It gave you an uninterrupted view of the green, brown, yellow and red foliage which swayed, hypnotising you into a peaceful state.  Plain as it was, no-one would call it ordinary.  Lovers would sit there, planning their future or making up from the argument of a few hours before.  Children would stop there with their parents to take a drink that was always carried in that huge bag that one of them had over their shoulder, or to work up some new energy before rocketing off along the path to a new adventure.  Couples, or friends, of advanced years would lower their aching bones onto the forgiving wood, giving their joints a chance to recover before making the effort to reach the car park and their ride home.  Teenagers would gather round and on it to hold their meeting, in which little was discussed and nothing was resolved – just a sense of camaraderie prevailed.

And in the night?  Who knew?  Lost children, who had wandered, unfound, for years – perhaps centuries – in an effort to locate whoever had left them there without realising.  Dogs, taken to a place far from their home and left to fend for themselves, but ever returning to that place in the hope that they would be remembered.  The lover who had anticipated a rendezvous in order to run away to the perfect life, only to be disillusioned and left to pine away.

That bench knows things.  The wood in it keeps a thousand, thousand secrets,