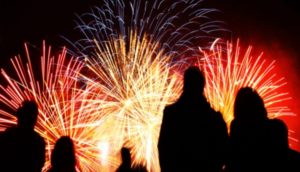 Here is something (else) I will not miss.? I say not miss, but there are aspects I will look back at fondly.? Today is November 5th, the traditional marking of the failed attempt to blow up Parliament and the English (Protestant) king in 1605.? As a small child, I used to hold my sparkler with trepidation, hoping it wouldn’t spit at me and cause a non-fatal injury on my hand.? Fascinated yet scared at the same time.? As a teen, the bigger and more colourful the better.? As an adult with small children, seeing the displays with new eyes through the wonder of our little ones.? We used to have combined parties with friends, making them – in effect – organised display

s.? Mums made the food, we all provided some of the fireworks and the dads took charge of ‘lighting the blue touch paper’.? No gender bias here!

Then someone, in their infinite wisdom, decided that fireworks had to be LOUD!? If you weren’t shaking the leaves from the trees, frightening animals and making babies cry, you were doing something wrong.? Also, Bonfire/Firework Night had to begin at least three weeks before the actual date, thereby making it indistinguishable from Halloween.

We are now in a country, like many others, that doesn’t celebrate Bonfire Night.? I stopped short once, in Italy, of explaining Bonfire Night and who the guy represents.? I didn’t think the Catholic neighbours would appreciate it.? So tonight I am hoping we won’t hear any fireworks.? It would be unlikely in the extreme, unless the local Brits had a party.? We haven’t heard about one so I’m guessing not.? Peace and quiet on November 5th for the first time in many, many years.? Unless we hear the ones from across the Channel – we’re not that far, after all.